Code Access Security is one of the powerful features of .NET but at the same time some confusion exists about its terminology and its usage. With this, I would like to make an attempt to explain some of the terminology with diagrams. This document does not explain all the details related to CAS, as lot of information already exists on the internet and only gives a jump start to Code Access Security.

The basics thing is whenever any code is being executed in managed world the .NET runtime verifies whether that code is allowed or not based on evidence and set of permissions.

Where from the code came?

What permissions are allowed for the code? 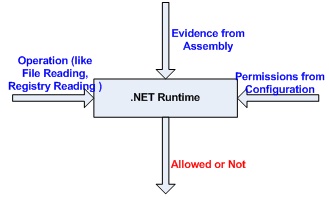 With the above basics let us explore Evidence and Permissions and other Code Access Security terminology.

Evidence of an assembly is about its identity who it is and where it came from.

How does System find out about this?
Codebase property of an assembly determines about its location which will result in either local directory, intranet/internet.One can get strong name and publisher details from the assembly manifest.
Once the Evidence of the assembly is gathered, the system grants some permission to this assembly.
How does System find out what permissions an assembly can have?
Time to explain some more terms. Let’s try to understand the following.

Code group is a group of assemblies which satisfies the same condition. A code group will have one member condition which decides about particular assembly can be a member of this (group) or not. 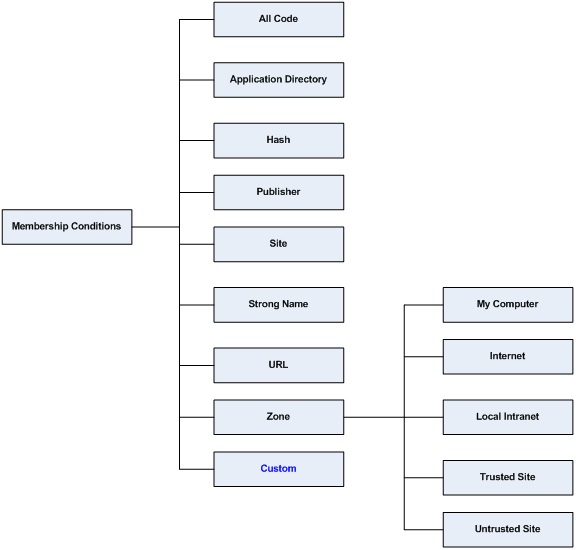 Permission is what the code can do with a particular resource like File, Registry etc., and Permission Set is collection of permission.
.NET Default Policies will be

Now, we understood Policy Levels, Code Groups and their Permissions. It is time to find out how the system assigns the permissions to the loaded assembly.
Below is pseudo code how .NET Security system grants the permission to the assembly (Assumes no programmatic security)

// Across levels it is intersecion of permissions

// Assume Exclusive and LevelFinal are not set

How does it get enforced?
The .NET classes ( System.IO.File , Microsoft.Win32.Registry classes will do the rest ) will enforce this by calling to appropriate security class.
Lets’ see how the File.OpenText code does this.

The call to .Demand will check the permission and throw an exception if it is not permitted to open the file.
If you have call to unmanaged dll where you open the text file the .NET will not be able to check whether you have permission to open or not.

Each code group in a policy consists of one property called Exclusive which means don’t consider any other permissions in that policy.
Lets’ walk through this…
Suppose your assembly belongs to Code group A, Code Group B and Code group C in Machine Policy.

There is another property called Level Final when checked, On Code Group, the policy in the next level will not considered.
Lets’ walk through this…

With Exclusive and Level Final property one can precisely control the permission set applied to an assembly.

A Software Engineer by profession and a Geek at heart. I love exploring new technologies and working on algorithmic problems. As of now, I write code for bread, butter and satisfaction. I like to develop applications, and generally that involves much more than writing code. It’s not just about hurling code, but producing something meaningful that has a measurable and positive impact, helps others and solves interesting problems. View all posts by Pranav